Because we all need a good laugh
Richard

A few snippets on the subject of our chosen like of work….. 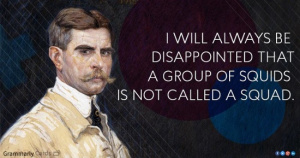 There was once a young man who, in his youth, professed his desire to become a great writer.When asked to define “Great” he said, “I want to write stuff that the whole world will read, stuff that people will react to on a truly emotional level, stuff that will make them scream, cry, howl in pain and anger!”

“In English,” he said, “A double negative forms a positive. In some languages, though, such as Russian, a double negative is still a negative. However, there is no language wherein a double positive can form a negative.” A voice from the back of the room piped up, “Yeah, right.”

And if you are looking for inspiration for your next novel’s title.

A Clifftop Tragedy  by Eileen Dover.
A…

2 thoughts on “Smorgasbord Laughter Academy – A Writer’s Life or Words to that effect!”