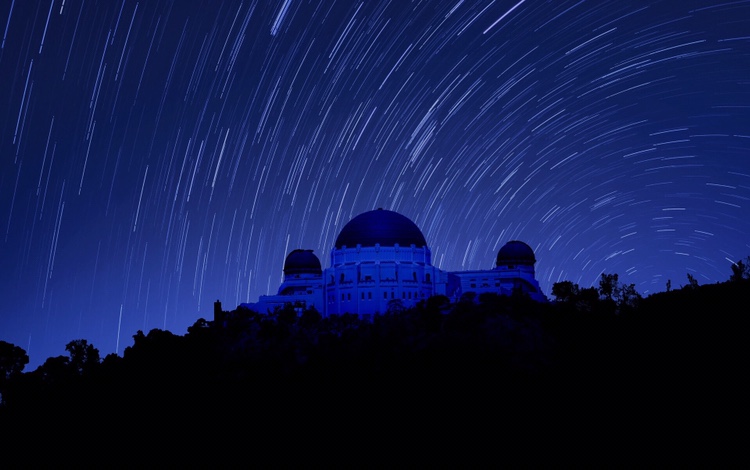 "Did you know, there's a waterfall where stars pour from the sky."

"Stop those tears and we'll go find it." 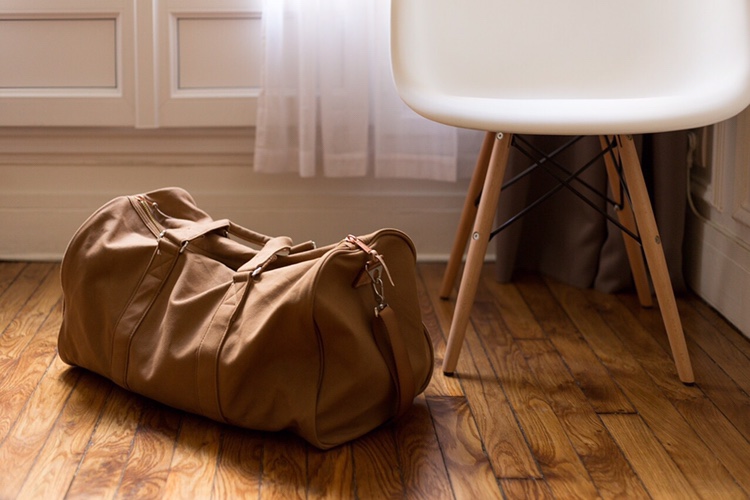 Tears on the table

Pooled on the floor

Droplets of the past

The only things left

The only things spared

From a determined glare

So very long ago

The key cold in hand 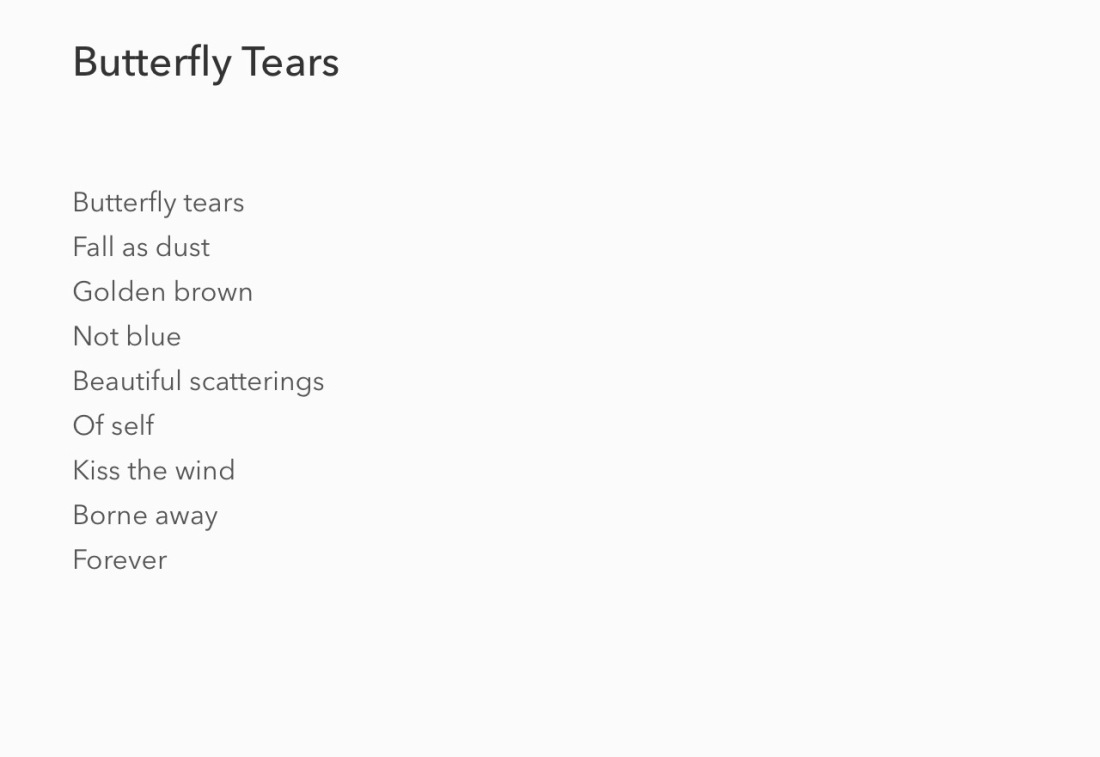 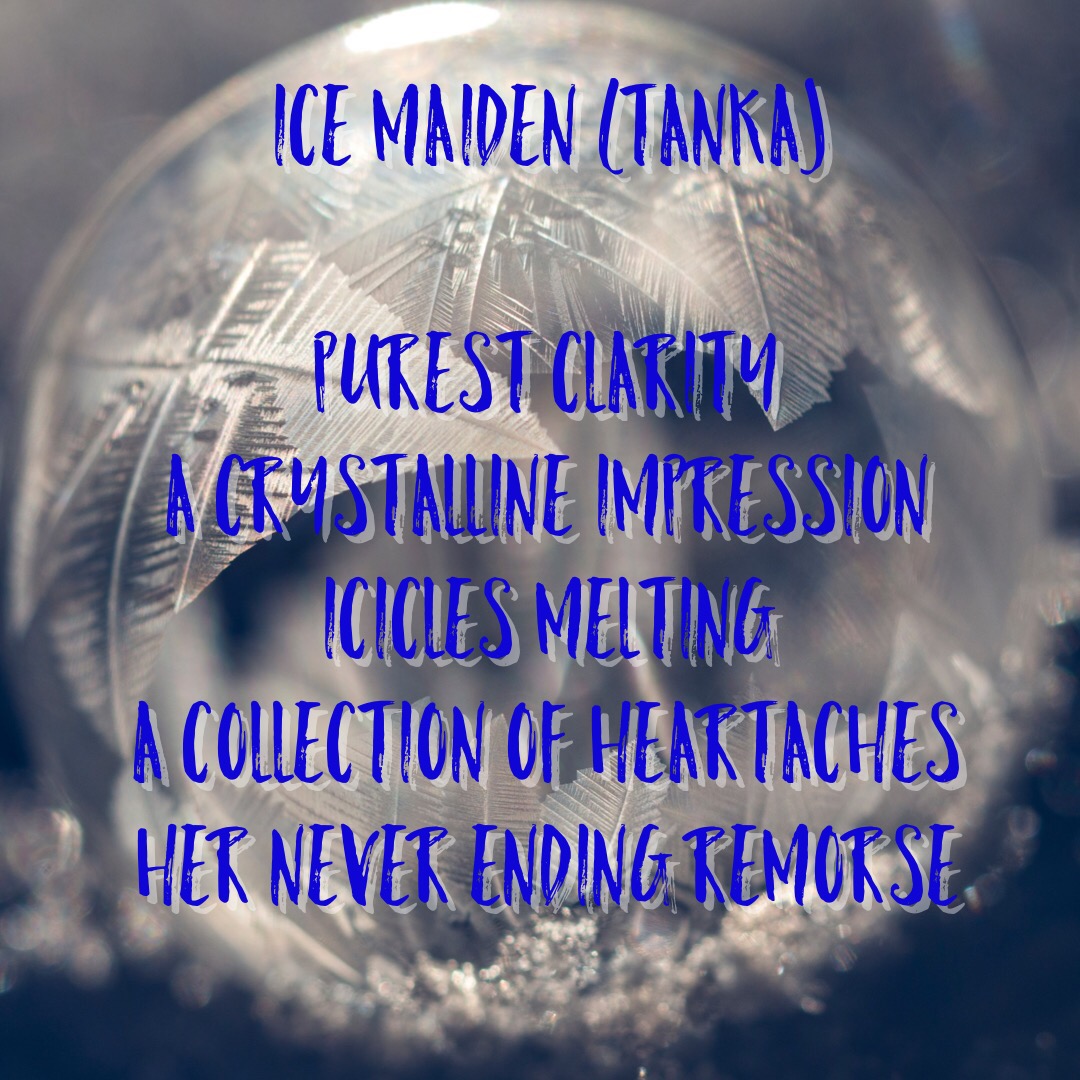 A collection of heartaches

I was no hero, no great warrior built to crush skulls with one hand whilst drinking flagons of ale with the other. I was a nobody, but somebody had to save her and everyone else was dead.
The heroes had entered the castle with flashing swords and raucous battle cries. Not one came out, not whole anyway. The powers that held the princess were formidable, more so in their own domain, a dark and inhospitable tower of polished, black rock. Obsidian, one hero had called it. His tomb had said the next.
When the last of them rolled down the hill head over… well, head because that’s all the evil ones left, I decided to act. I couldn’t bear the sound of Crystal’s tears — that was the princess’ name — as they tinkled through those stalled evenings. Only the dawn chorus silenced her, unless that was her, too?
I climbed the hill during a terrible storm when no one else dared venture out. Good, I preferred a quiet send off, the pause between thunderclaps and jolts of jagged light a balm to my fear. I crept up the vicious incline, slunk around the side of the castle to a wall of sheer, wet stone and found what I’d hoped for: climbing ivy would be my stairs. And so I climbed and climbed and climbed.
By the time I reached the open window of Crystal’s tower room, my fingers bled and head pounded from the storm, but I’d made it. Little old me had done what no other could and not a fly or rat or bat knew. My elation was short-lived.
She sat on a simple chair of carved mahogany caught in profile by the light of a single flickering candle. She gleamed, her secret truth revealed.
I dragged myself inside to the crunching of something underfoot. The stone floor was more shale beach than walkway, a million tiny crystals glistening like two dimensional stars. The princess sat immobile, whether she even knew me there I could not testify, but I hoped. Yes, I hoped.
The devils that imprisoned her would never lose their prize for Crystal was as her name; she sat there a sculpted glistening statue. Not a hair stirred on her head, not an eyelash batted, only the tears that dropped like raining diamonds gave any sign of sentience.
I left her there. I kissed her on the cheek and deserted her for to have moved her would’ve shattered her. I left her with a handful of tears in my pocket and shame in my heart.
When I returned cut, bleeding and tired beyond belief, I took some comfort in the fortunes I’d have to come. Alas, all my pocket held was water, her tears already spent. They didn’t even tinkle when I poured them to the floor.

My home, and more precisely, the rear window that encompassed a third of my writing studio, looked out upon a wall of rock. Most people would’ve found it a tedious view at best. This was not the case with me. I enjoyed nothing better than to sit tapping away upon my keyboard whilst casting occasional glances to the mountain’s base. I loved the way the light played across its marbleised exterior, variants of grey marking the passage of the day. By the time I was ready to pack my laptop away, I would be faced with an imposing wall of obsidian mimicking rock. Beautiful in an immobile sort of way.
The mountain was far too high and much too an acute angle for me to see the top, in fact, I was fortunate that it was north of my position and therefore cast no shadow. That’s why I was shocked when it did. A large section of the rock face turned black in the middle of the day for no apparent reason whatsoever. I was so surprised, I even rubbed my eyes twice like a cartoon character or a child who’d had a bad night. However, there was no denying the facts, the mountain had changed.
Thinking it some bizarre natural phenomena, I went to do what all good Englishmen should, make a cup of tea. When I returned the black had gone replaced by blue; water seeped through the very rock. In trails of cascading cerulean, the mountain wept. Wept! I hear you cry. Yes, wept. For as I strained my neck to gaze to the water’s source, I clearly saw two bushes growing where there’d been none like great bushy eyebrows, from beneath which poured the streams. Above said bushes were dry as was to either side. The mountain wept, and that was that.
I reported the abnormality to the Environment Agency not because I was superstitious or frightened but just in case enough water spilled from the thing to flood my lower floors. You see, even a fantasy writer can be practical where insurance is involved. However, by the time they arrived the very next day, the mountain had ceased its outpourings and had returned to the same veined rock it always was.
“Must be an aquifer,” said the knowledgeable man in his white overalls and clipboard. “These things happen if a mountain stores enough rainwater inside. Sometimes, they literally burst.”
I accepted his explanation with smiled apologies for having wasted his time, but declined to mention the eyebrow bushes had also disappeared.
“Anyhow,” he said after finishing his third cut of tea, “they’re levelling it all soon for the new motorway.”
“What?” said I, having heard not a word of it.
“It’s been in all the news,” he added.
It wasn’t until he’d gone that I wondered just how long I’d been staring at the mountain? How I’d written three volumes when I’d thought to only have written three pages? Had time moved for me as it did geology? Had I become one with the natural world? All very strange!
As I sat there that evening mulling over the hows and whys for the umpteenth time, I distilled them all down to two salient queries: Could a mountain cry and wouldn’t I if millennia of life was to be ended?
I left my home before the dynamiting. I had to. Wouldn’t you?

The world shimmers,
glistens in dazzling monochrome;
the way to peace is paved in grey.

Where others point and look,
I slink into the shadow of a shadow,
hide behind a dream and weep.

In the mellow hours, she wept,
That time of velvet night.
I heard her from my window;
Restless, I paced a dream,
And thought it an angel, or faerie, or queen.
Lightless, I sought her,
Stole upon her tears,
But the witching hour concealed her,
Her sadness unrevealed.
I’d wake for years and hear her,
Although I’d moved away,
My theory formed from madness,
She wept from inside me. 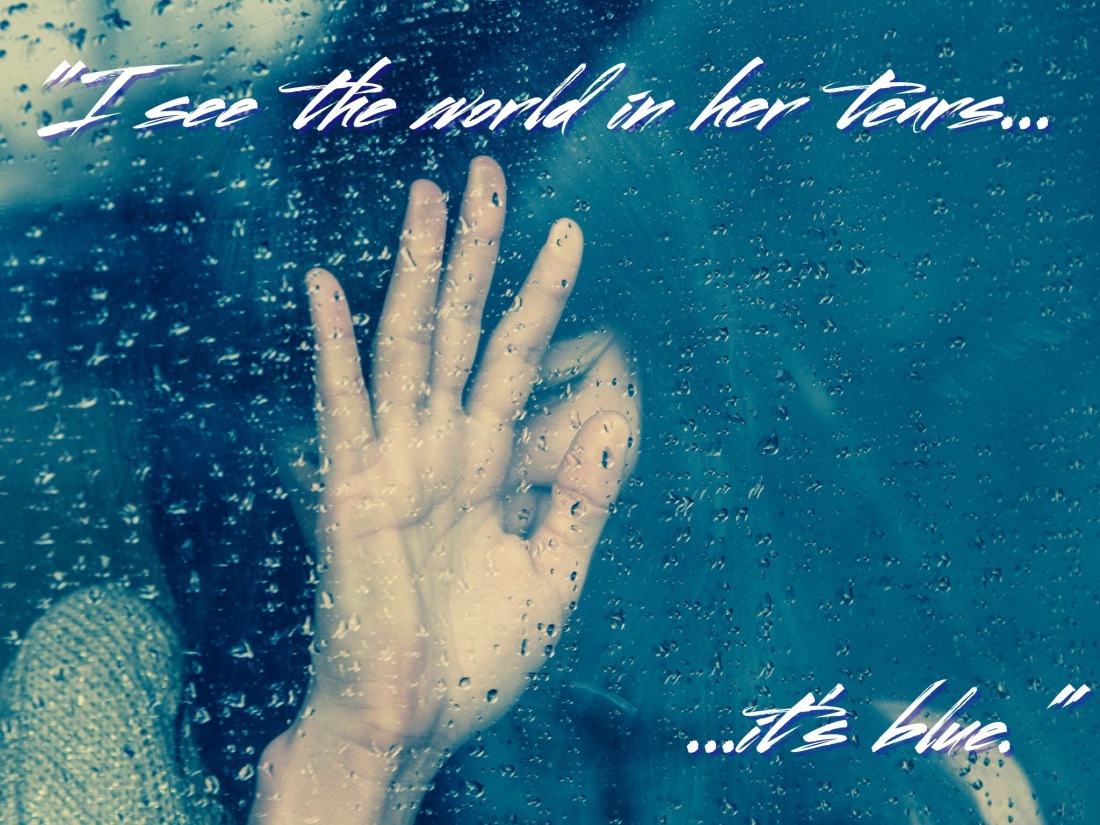 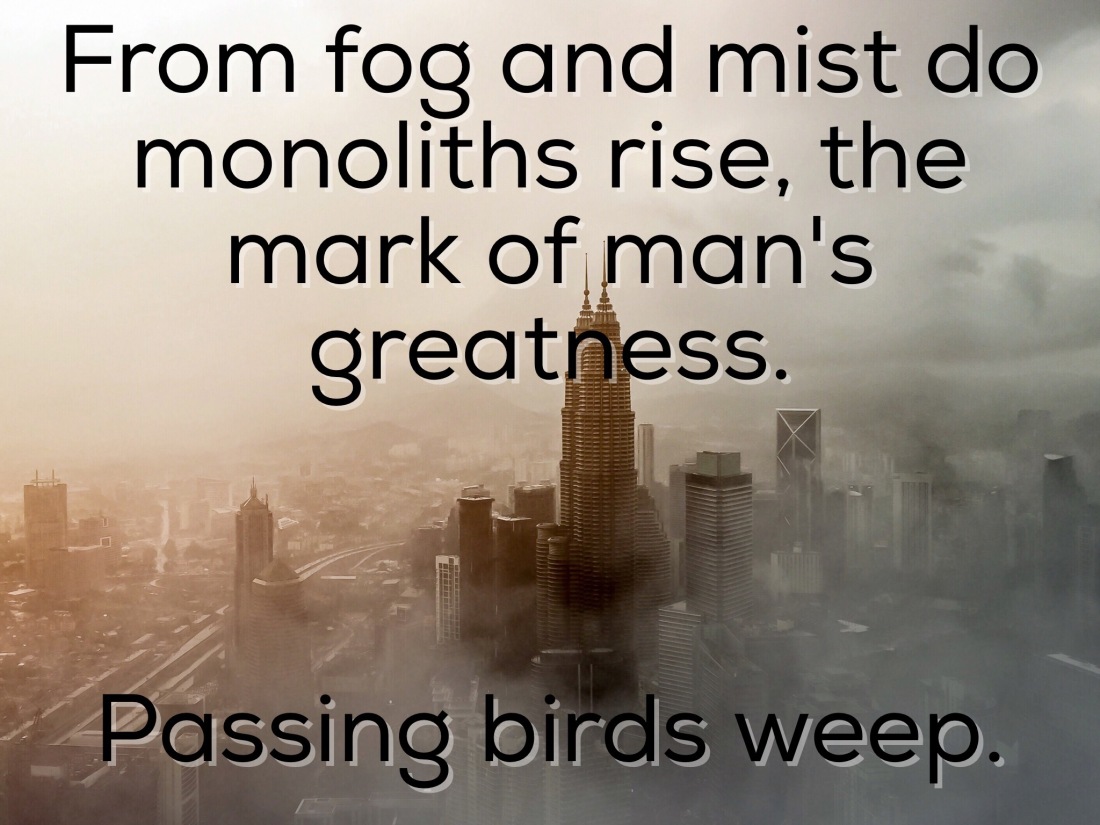