Author’s Note: As you all know, I’m in the business of making things up. However, real life can be just as extraordinary. Here is my latest conversation with a WordPress friend regarding her blog post and its redistribution. I use an app called Buffer. The conversation went as follows. 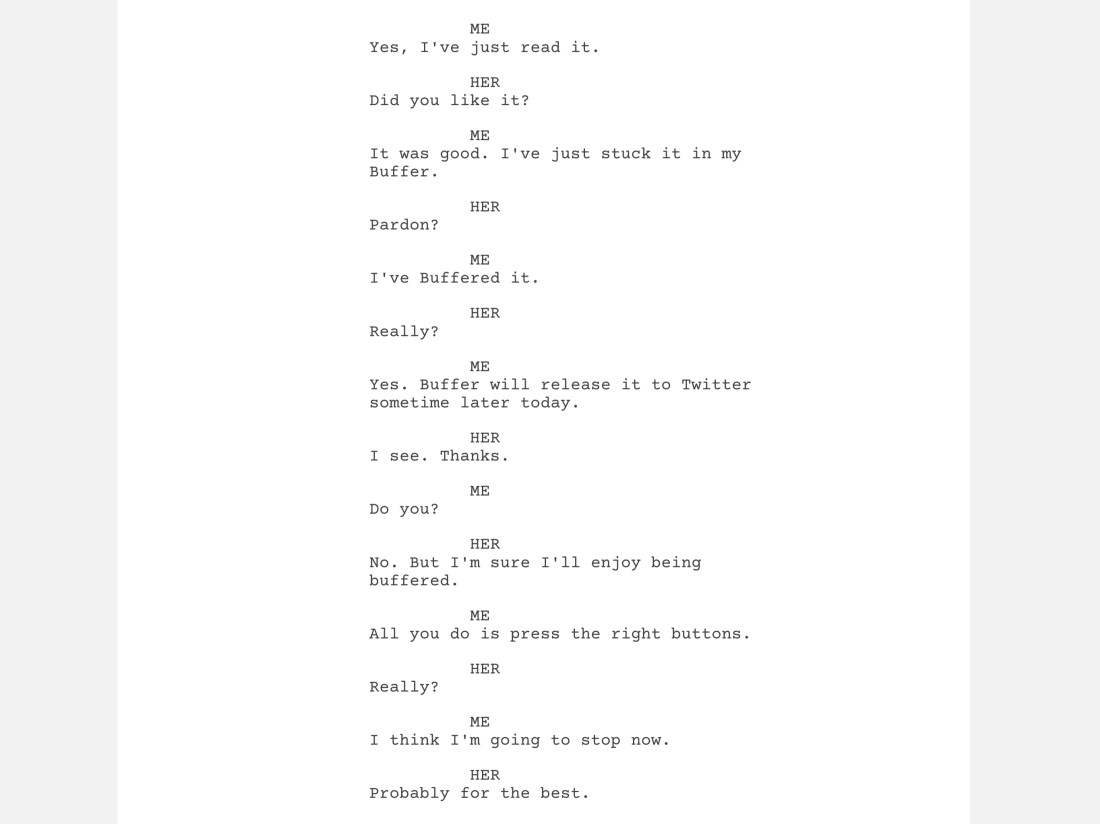 Author’s Note: I was recently treated to an app that makes scripts from your notes. I have found this a real joy to use as I can pour myself into dialogue whenever I like and the whole thing comes out clean for later use. In fact, I can’t stop. Here is a little scene from my WIP. The great Victorian investigator Mortimer Headlock, and his associate Miss Grace Grace, are inspecting Albion’s latest aeronautical device. The aeronaut, Clarence Periwinkle, is their host.

PS: If it’s any help to you, the app is called Untitled. My copy is on iOS and is currently half price. (Don’t laugh, I’m skint!)

Author’s Note: This is a scene I have decided not to use from my latest Steampunk Fantasy. The beautiful Miss Grace Grace has fallen foul of the evil Sir Magnus Monk, or so he thinks.

“I prefer the subtle prod, the suggestive wink, the perfect persuasion. Life is too short to wallow in misery when a bird has but to loose its wings and fly. I am a bird, Magnus and my wings refuse to be pinioned.”

“Correction, sir, I was nothing. However, my father and late mother gifted me that most precious commodity.”

“Promise. This little bird, this canary, as some have said, has so much world to see, so many friends to smile with, so much love to find and lose and find again, that I shall never allow a petty, hawklike predator such as you to quell it.”

“And yet here you are tied to a chair before this… what did you call me… petty, hawklike man. Who’d have thought it other than I, after all, brains always trumps beauty.”

Sir Magnus Monk sneered the sneer of a lecherous old goat and ran one dirty, chipped fingernail along his prize’s cheek.

When the ropes Monk bound Miss Grace Grace with slipped to the floor with a gentle hush, her knee making contact with parts he’d rather have not shared, doubling the hunchback over so his nose brushed the mouldering carpet, she returned his sneer with a rather more elegant contempt.

“Yes, Sir Magnus Monk, slave to a fallen angel, a man some have said already damned, you are quite correct, brains always triumphs. Such a pity you have none.”

With that, Miss Grace Grace rose to her feet like the lithe beauty she was resplendent in her always canary-yellow garb and exited the room. She did not look back. The little bird had flown. 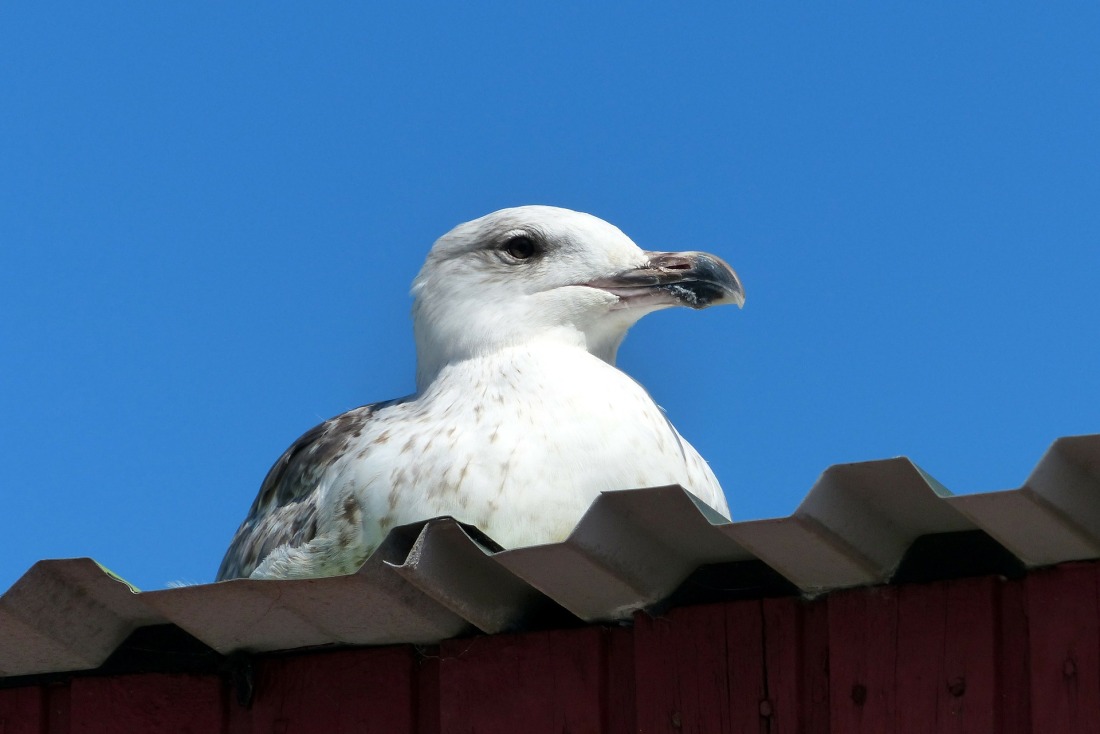 “The most fun I’ve ever had with a teacup was kicking one up in the air like a football for as long as I could.”

“How many keep-ups did you manage?”

“Keep-ups. That’s what they call it when you keep a football in the air. I presume it’s the same for a teacup.”

“Every day is a struggle.”

“Makes you want to kick a teacup up in the air.”

“Exactly! That’s exactly it. You just want to boot the hell out of it.”

“Which brings us nicely back full-circle.”

“So, just how many teacup keep-ups did you manage?”

“And that’s the end of another sparkling conversation.”

“You mean, you didn’t empty the teacup first.”

“I didn’t have time, I was kicking it at a seagull.”

“I thought you said you was trying to keep it up in the air?”

“I was. The seagull was flapping overhead trying to snatch my sandwich. I hoped to keep kicking the teacup in the air to scare it off.”

“Honest. They’re full of protein. I think I should’ve cooked them first though.”

“Let me get this straight, you were kicking a teacup at a seagull that was trying to rescue its chicks from a seagull sandwich.”

“Last Friday. They were squawking like mad and putting me off. So, I went up on the roof to shut them up, then brought them back down for a snack.”

“But I was at work last Friday!”

 
"I'll never forget stepping onto the summit of Mount Everest, the world at my feet, reaching for God's hand."
"It was a small, Welsh hill and even then you got a nose bleed."
"That's not how I remember it and I've a photographic memory."
"Yeah, it's often negative and like the rest of you, it's underdeveloped."
"Pft! I can close my eyes and see everything, the sky, the snow, the man selling hot dogs."
"Blimey! You were there."
"Yup. Beautiful memories, John. Wonderful days."
"How did you get down?"
"Flew."
"I suppose that's because you're an eagle too."
"Nope. I desperately needed the toilet."
"Did you make it?"
"I'm ashamed to say not."
"Like I said, Wales all over again."

“I know why you’d say that, but you’re wrong. It’s an albino blackbird.”

“No, it’s a blackbird without pigment.”

“I assure you, as a practising ornithologist, that’s a blackbird.”

“Then why’s it eating a fish?”

Author's Note: Our friend Officer Robertson can never do right for wrong. He's a composite character made up of…. well, me."

"A close shave."
"Indeed."
"Your thought's, Robertson?"
"Hmm… Well…"
"Come on, man, spit them out."
"I can only say this. If one is shaving anywhere other than the face, one should avoid menthol lubricants."
"Pardon!"
"Menthol lubricants, sir. It's rather like placing your components on a bed of ice cubes."
"I see. Good advice."
"Welcome."
"But, Robertson?"
"Sir."
"What has that to do with the bullet narrowly missing his heart?"
"Ah…"

Author's Note: Perkin Perkins is a man renowned and treasured for his calm. That does not mean he is always so. After all, there are times when everyone meets a complete ****. Still, there's certain ways to express it.

"I have seen things I should rather not, things one should never have had to see, terrible things. Life has weathered me, one might say. Therefore, I can say this with a degree of certainty others could not. In fact, I can say this with the assuredness that only experience can qualify."
"Really, Plopkins?"
"Perkins. And yes, Sir Magnus Monk, he who thinks himself the better of everyone and everything merely through a three-lettered extension to his name, one of birth, not earning."
"Then thrall me with this thus far unprecedented display of backbone. If you can, Perkster? If you can?"
"For the last time, it's Perkins."
"My apologies, you're just so forgettable."
"Ironic, for my revelation is this and I never forget it. You, Sir Magnus, are an arse!"

This is Perkin Perkins and Sir Magnus Monk (weasel that he is) at their best. Sir Magnus does not care for us little people. I hope this illustrates it. (PS. As usual, and for good reason in the upcoming novel, No one remembers Perkins name).

“I believe this is yours, Sir Magnus.”

“I think I should know if was missing a wooden leg, Parpkins.”

“You are sat down, sir. The realisation may not dawn upon you until you stand up.”

“How do you think I got here, Poplet?”

“Mine is not to presume but to serve.”

“Well, do yourself a favour and get the chef to serve some food post-haste or I shall recommend to Her Majesty that she serve you your papers.”

“There’s a problem with the chef, sir.”

“Plerpkin, you’re beginning to incur my anger! Where the hell is he?”

“Your automobile is parked on him, Sir Magnus. Ah, of course, now I come to think of it that must be where this leg came from. I’ll just go and inform Her Majesty of your inelegant manoeuvres and why she’s currently lacking her lunch.”